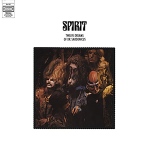 Today’s Cool Album of the Day (#132 in The Series) is Spirit, Twelve Dreams of Dr. Sardonicus.

It’s a shame you don’t hear ‘Spirit’ on the radio. They were an outstanding band in their time. Let by the late Randy California and his stepfather Ed Cassidy, ‘Spirit’ released fourteen albums between 1968 and 1996. Twelve Dreams of Dr. Sardonicus was their magnum opus. It was released in 1970.

‘Spirit’ had many minor hits and one huge hit. You’ll find that huge hit here. That was Nature’s Way. (Compare the intro to Nature’s Way and Cheap Trick’s The Flame some time. I think Cheap Tricks owes Mr. California a writing credit!)

What are some of the standout tracks? For me they are Prelude-Nothing to Hide, Mr. Skin and finally Animal Zoo.

Jay Ferguson handled much of the lead vocals. He would go on to join Jo Jo Gunne. They had a huge hit with Run, Run, Run. After going solo he had another major hit with Thunder Island in 1978.

I had a chance to see Spirit at a great South Suburban club called Pointe East in, I’m guessing 1979 or so. We had a table right in front of the stage. Randy California stepped down and did a solo standing on our table. I of course, was at the bar getting a pitcher of beer at the time.

Randy California left us in 1997. His son had gotten trapped in rip current while swimming in Hawaii. He was able to save his son but lost his own life. He was a true original.