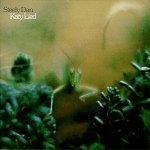 Last year Steely Dan did a tour where they played one of three albums in their entirety.   They would ‘hunker down’ in town for four nights.  The first three nights they would play either The Royal Scam, Aja or Goucho.  The fourth night would be requests. Unfortunately, they didn’t play my favorite Dan album, Katy Lied.

Don’t get me wrong, I love those other three releases.  But give me Katy Lied.

I could list nearly every track as a favorite.  How can you choose from Black Friday, Bad Sneakers, Doctor Wu, Chain Lightning. Everyone’s Gone to the Movies or Any World (That I’m Welcome To)

Steely Dan has always been two men, Walter Becker and Donald Fagen. They would surround themselves with some of the best hand picked musicians every time they would enter into a new project.

Katy Lied had some wonderful players.

Michael McDonald was all over this record with his distinctive backround vocal sounds. (I one heard a disc jockey say Michael McDonald’s voice sounded like trying to start a car on a freezing morning. I had to laugh along but I like it.)

Numerous guitar players were asked in.  Rick Derringer added the solo to Chain Lightning, Larry Carlton played on Daddy Don’t Live in That City No More.  Elliot Randall could be heard on Throw Back the Little Ones. Dean Parks appeared on Rose Darling.

Drums were handed by Jeff Porcaro. When you have Jeff Porcaro you need not look elsewhere.

It peaked at #13 on the Billboard Album Charts

Today’s Cool Album of the Day is Chicago’s, “Chicago VII.”

Far from their most popular release, but one I just loved from the day it was released until now. A double album, side one was almost exclusively semi-free from jazz.

Side Three opens with a couple James Pankow tracks. The first was released as a single, “(I’ve Been) Searchin’ So Long.” which also features some great harmony vocals by The Beach Boys.
Next up are two great pieces by the late, great Terry Kath, ‘Song of the Evergreens’ and ‘Bylbos.’ Bylbos features Kath on vocal as well.

We get back to back singles on Side Four. Cetera’s ‘Wishin’ You Were Here,’ which also features some great harmony vocals by The Beach Boys and Lee Loughnane’s ‘Call On Me.’

I loved the diverse sound of these discs. Some wild instrumental jazz to some great pop singles. The first few releases were produced with a great leather tooled album jacket. You just don’t get those kinda goodies in CDs!

Little Feat “Down on the Farm”

Today’s Cool Album of The Day is Little Feat, Down on The Farm.

This album was released in 1979. It was being recorded when lead singer, slide guitarist, front man Lowell George passed away. Today is the 31st anniversary of Lowell death.

It wasn’t one of the bands better selling, nor better received albums. But I loved it. It’s one of my Little Feat favorites.

Favorite tracks? They’d include, ‘Six Feet of Snow, Down on The Farm, Perfect Imperfection’ and ‘Wake Up Dreaming.’

Here’s a video of the title track but for something different. It’s by Paul Barrere’s band, The Bluesbusters, it’s followed up by Feel the Grove.