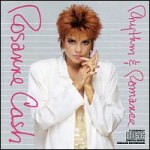 Today’s Cool Album of the Day (#122 in the Series) is Rosanne Cash, “Rhythm and Romance.”

“Rhythm and Romance” is one of my absolute favorite albums of all time.   I of course knew about Rosanne Cash before this album but had never really known much about her music.  This changed all of that.  My respect for her and her music is as high as for any other musician of which I know.

This album did quite well on the country charts. But it was probably the least country sounding album she had done to that point.  She definitely did not have a country band on this one.

The 1985 production was mainly written by Rosanne herself.  She did get a little help from Vince Gill on ‘Never Alone.’

She also included two songs written by others.  Ben Tench and Tom Petty wrote ‘Never Be You’ while John Hiatt wrote the rocking ‘Pink Bedroom.’  Then husband Rodney Crowell co-wrote with her one of the best songs here, ‘I Don’t Know Why You Don’t Want Me.’

Rosanne wrote the remaining six tracks.  Best of that bunch included ‘Hold On, Second to No One’ and ‘My Old Man.’ He of course was Johnny Cash.

If you’ve never owned a Rosanne Cash album is indeed a great place to start.  There’s not a bad note of music on the disc.  She has a library of great music.  Here follow up, “Kings Record Shop” was a HUGE seller.  “Interiors” and “The Wheel” were a move more into a singer/songwriter type of sound. “The List” was flat out, one of the best albums of 2009.

“Rhythm and Romance” reached #1 on the Billboard Country Charts and #101 on the Top 200 Charts.

‘I Don’t Know Why You Don’t Want Me’ reached #1 on the Billboard Country charts and #16 on the Adult Contemporary Charts.

‘Never Be You’ hit the top of the country charts while ‘Second To No One’ peaked at #5.

Check out the rockin’ Pink Bedroom video followed by a great live version of ‘I Don’t Know Why You Don’t Want Me’ also featuring Rodney Crowell.

Rodney Crowell is one of America’s great singer/songwriters. He’s written hits for Bob Seger (Shame on the Moon), George Strait/Jimmy Buffett (Stars on the Water), Waylon Jennings/EmmyLou Harris (Ain’t Livin’ Long Like This) and on and on.

He also saves some good ones for himself. “Diamonds & Dirt” is a fine example.Highlights include: ‘I Couldn’t Leave You If I Tried, She’s Crazy For Leavin’, After All This Time’ and a Duet with then wife Rosanne Cash ‘It’s Such a Small World’

Rodney was a member of the great 70s EmmyLou Harris ‘Hot Band.’ But he also had a hot band of his own. His guitarist during this time was a great picker named Steuart Smith. Steuart is now the lead tour guitarist in The Eagles. I believe he’s played with them for about five years now replacing Don Felder.

Others filling out the sound here include Eddie Bayers and Russ Kunkel on drums, Mark O’Connor on fiddle/mandolin and Vince Gill on backround vocals.

Rodney and Vince played together in a high school band called ‘The Notorious Cherry Bombs.’ They reformed a few years ago and released one disc. It included a GREAT single called ‘It’s Hard To Kiss the Lips at Night that Chew Your Ass Out All Day Long.’

Country radio didn’t have the stones to play it. Their loss.